FOOTBALL fans in Cardiff turned out to our Hadfield Road dealership last Saturday (August 9, 2014) to see two of the game’s most sought-after prizes.

Members of staff from Wessex Garages on Hadfield Road and visitors with the UEFA Champions League trophy and the UEFA Super Cup trophy while they were on display at the dealership.

Visitors to the outlet were able to have their photograph taken with the Union of European Football Associations (UEFA) Champions League trophy and the UEFA Super Cup trophy.

Gareth Howells, our General Manager at the Nissan dealership, said: “We were honoured to have been chosen to play host to two of the biggest prizes in football ahead of the UEFA Super Cup final, which takes place in Cardiff on Tuesday (August 12), between Real Madrid and Sevilla.

“Lots of people turned out to take advantage of this once-in-a-lifetime opportunity to see the trophies up close and have their photograph taken with them. We were able to take professional photos and people could also take their own.

“The professional photos are available for people to view via our Facebook page,www.facebook.com/wessexgarages. Anyone who would like to be sent a high resolution copy of their photo should email social@wessexgarages.co.uk.

“The visit was arranged to celebrate Nissan’s new role as an official partner of the UEFA Champions League and UEFA Super Cup.”

The UEFA Champions League is an annual football competition. Four teams from each of Europe’s best national leagues participate and the winning team goes on to compete for the UEFA Super Cup.

The UEFA Super Cup is played between the winners of the UEFA Champions League and the UEFA Europa League.

For more information, please call our dealership on Hadfield Road in Cardiff on 02921 677 650. 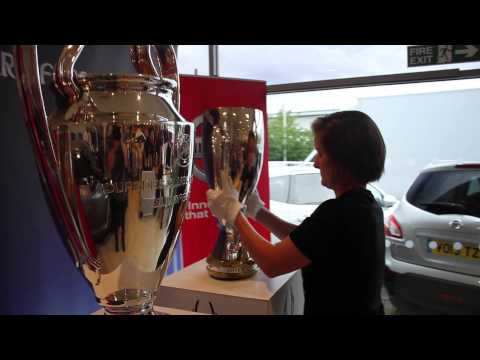 Share:
Make An Enquiry
Back
Vehicle Valuation
Compare Saved Vehicles
Top
Close
Your Cookie Settings
Select your cookie settings
Strictly Necessary Strictly Necessary cookies are essential to let you move around the website and use its features, such as accessing secure areas, shopping baskets and online billing. These cookies allow our website to provide services at your request.
Performance Performance cookies collect information about how you use our website e.g. which pages you visit most often, and if you experience any error messages. They also allow us to update our website to improve performance and tailor it to your preferences. These cookies do not collect any information that could identify you - all the information collected is anonymous. They will not be used to target adverts to you on other websites.
Functional Functionality cookies are used to remember the choices you make, e.g. your user name, log in details and language preferences. They also remember any customisations you make to the website to give you enhanced, more personal features.
Targeting Targeting cookies collect information about your browsing habits to deliver adverts which are more relevant to you and your interests. They also measure the effectiveness of advertising campaigns.
Save Settings
Cancel Changes

Your settings will take affect when you refresh the page or move to a new page. Find out more about cookies